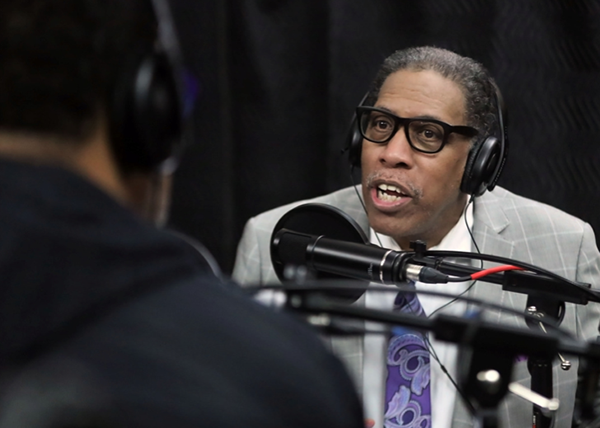 When Larry Robinson and Howard Robertson created a pilot for their sports talk radio program “R&R on Sports” in 2013, something was missing from the marketplace.

“At the time, there were no national syndicated sports radio shows with two African-American male hosts,” Robinson says.

The two Memphians, who have filled that void locally and nationally on terrestrial radio, are taking their broadcast beyond the earthly realm, now beaming their take on sports via satellite, in a new partnership with SiriusXM. Dubbed “A Little R&R,” the show is part of the Saturday lineup on Dan Patrick Radio, Channel 211.

They’ve talked about the opportunity since the show’s first episodes.

“For me, that began to be like Charlie Brown, every fall, getting ready to try to kick the football. Every year, he thinks this is the year that he’s gon’ kick the football, and Lucy pulls it out and he falls on his (behind),” Robertson says of the prospect of taking the show to SiriusXM. “We forgot that it ain’t our timetable. Somebody bigger and badder than us is working this stuff out.”

“What most people don’t realize is that this is a G-O-D thang,” Robinson says. “We got this higher power that’s leading the way.”

Alongside the higher power both men credit, management at Sports Byline USA, a San Francisco-based sports radio network, was responsible for making the connection with the world’s leading satellite radio establishment.

Unlike sports shows that focus on daily news items and scores, the show Robertson and Robinson produce includes what they call “ICONversations,” when they invite notable names in black American sports history to discuss evergreen topics pertinent to black athletes and sports fans.

“We were blessed to secure in-depth interviews with folks like Hank Aaron, Jim Brown, Dr. J (Julius Erving), Ken Griffey Jr., Earl ‘The Pearl’ Monroe. I mean, name someone (and we’ve probably talked to them),” Robertson says. “Jim Brown thanked us for an intelligent interview,” he adds in a self-congratulatory tone.

“These were folk who, after it was over, everybody would always tell us, ‘Hey, whenever you need me back, just call me,’” Robertson says. “We absolutely look at it as an opportunity to represent Memphis.”

Robertson, who serves as CEO for Trust Marketing along with his wife and Memphis Chamber of Commerce interim president Beverly Robertson, says he has always wanted to be an ambassador for Memphis.

But his road to finding out how to do that was long and winding.

“From the time I was a kid, I would listen to a lot of radio: WDIA, WMPS, WHBQ, and whatnot. I was all up and down the dial,” Robertson remembers.

“I always wanted to be able to make a living using my imagination. That’s all I knew at the time. I wanted to create stuff. I grew up in the ’50s and the ’60s. Didn’t nobody do that that looked like me.”

Robertson decided being a lawyer was a safer bet, but after he didn’t get into Georgetown, his law school of choice, he turned down offers from other law schools and decided to re-evaluate his career path.

He came back to Memphis with two job offers. “One was to be a publicist at Stax, the other was to be a copy writer in the fledgling advertising department of a more fledgling company called Federal Express,” he says laughing.

“I always wanted to be able to make a living using my imagination. That’s all I knew at the time. I wanted to create stuff. I grew up in the ’50s and the ’60s. Didn’t nobody do that that looked like me.”
Howard Robertson, “R&R on Sports” co-host

He chose Stax, seeing the company through the forthcoming decline of its musical heyday.

Larry Robinson, who operates a podcast and radio studio called Kudzukian, produces several other programs that he expects will follow “R&R on Sports” to a home on a larger platform. Among them is the music program “Riffin’ on Jazz” and the social outreach program “Funky Politics.”

Robertson says his radio gig reminds him a lot of the outlet he got on his first job as a part of Memphis’ soul empire.

“The world ended up hearing and appreciating (Stax). That’s the same thing that’s going on at Kudzukian.”

Robinson, a native of Louisville, Kentucky, named the company after the kudzu he saw overtaking walls along a stretch of highway.

“It reminded me of the effect urban culture has had on popular culture. It’s covering it,” he says. “It’s made it more palatable to more people. I kept saying, ‘Man, it’s like the kudzukian effect.’”

Also a marketer by trade, he says he simply got tired of the traditional advertising grind. “I was really, really, really bored with the idea of asking somebody to allow me to market their stuff,” he says.

Robinson remembers the moment he conceived the idea to switch gears in 2013, when he was driving home from the Kentucky Derby. He asked God for answers on what to do next with his career.

“The resounding thing that came back was sports radio, and I was thinking, ‘You’re out Your mind. You’re trippin’, God.’”

The next question Robinson asked God was, “Well, who’s gonna do it with me?” And he says the answer he got was immediately Howard Robertson, whom he had befriended after moving to Memphis in the late 1990s.

Robinson describes the program they created as an “intellectual party,” with meticulously curated music to go along with their enthralling conversation.

“We’re really helping to put a mirror on our community, and really show the excellence and the beauty by utilizing the platform to distribute those stories.”
Larry Robinson, “R&R on Radio” co-host

And, while they have a good time on “R&R on Sports,” topics such as racism, sexism, domestic violence and financial stability are common discussion points, with sports as the lens for social engagement.

“We’re really helping to put a mirror on our community, and really show the excellence and the beauty by utilizing the platform to distribute those stories,” Robinson says.

You can hear Howard Robertson and Larry Robinson, along with their guests, on “R&R Sports” by tuning into SiriusXM Channel 211, home of the Dan Patrick Show, Saturday at 10 a.m. They are also available on podcast platforms through the Kudzukian website.